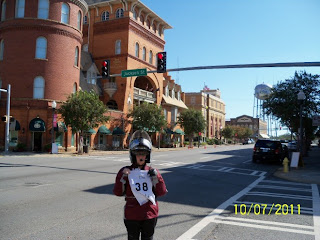 Back to the beginning!

We started from Albany, GA with a start time of between 0850 and 0910 AM. Any later than 0910 AM penalty points started to build - not the way you want to start a rally. You had to be at the finish line in Lynchburg, VA no more than 29 hours from your start time. Start times are verified by a gas receipt. As a good rallyist will always do, you check to make sure the receipt at the pump has all the required information such as date, time, location (it must say Albany), etc. We pulled up to the pump and did just that and out came a perfectly good receipt. Needing to start as late as possible within the window, we sat and waited chatting with other folks doing the same thing. I started pumping gas at 9:07 and after a quick splash of gas waited for the receipt WHICH DID NOT COME OUT OF THE DAMN PUMP! Rushing into the station to get the clerk to print one, I waited for what seemed and eternity before finally getting a duplicate receipt which read exactly 0910! Whew, one crisis averted and we hadn’t even started yet.
So, starting time is 0910.…odometer reading is 118291.
Off to the Holland Tire Company in Sumner, GA where the ghost of a man killed while running from the FBI is often seen. A quick picture of some signs and we’re off and running. Time: 0941 Odometer 118318. 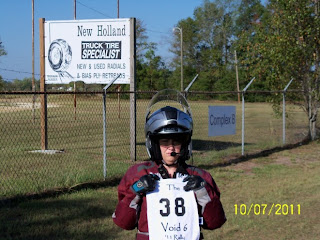 First mistake was made next. I know…awful early to be screwing up. In discussions earlier with a fellow rallyist who shall remain unnamed but his initials are DC and he rides a Kawasaki….we opted to head off our planned route for a higher scoring bonus. We had done some on the fly calculations which showed little difference so off we went. Mistake # 1. Anyway….we headed north to Monroe, Ga for a picture between water towers. Time 1341 - Odometer 118553. 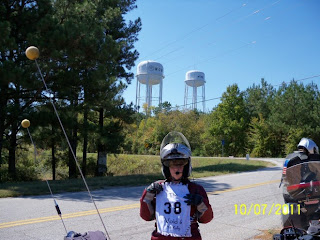 Off to Augusta, Ga for a photo of The Pillar. As the story goes, this 8’ tall pillar is said to be the remains of the old slave market from years ago. Scheduled to be removed several times for development, on each occasion, the person who was supposed to remove it died unexpectedly. It is said that a slave put a curse on the pillar to which he was tied as he was being sold. It really is rather unimposing and out of place and is unmarked. Time 1602 Odometer 118687. 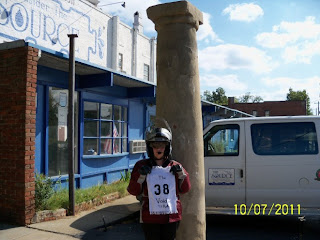 The Longstreet Theater in Columbia, SC was used as a military hospital during the Civil War. It has long been rumored that the morgue was housed in the basement in a room that is now serves as the “Green Room” for the theater. On the campus of the University of SC, many tales of strange sightings and sounds, especially late at night have some theater students refusing to be in the building after dark alone and institute a buddy system. Time: 1722 Odometer 118763. 9 hours into the rally and we’ve already logged 472 miles. The fellow sitting on the steps was a couple of buckets short of a full load and I never understood a word he said while we were trying to take a picture. 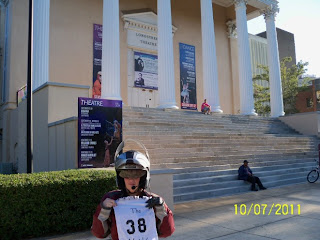 Read all about it here:


Time is now 2145 Odometer 119006. This is a pretty spiffy area with very nice older stately homes and McMansions. While tromping around looking for the cross we were supposed to find, the owner of the McMansion next door came out to see what all the activity was about. A very nice gentleman who bore a remarkable resemblance to Daddy Warbucks was really interested in what we were doing and had to share some tales of his own youthful scavenger hunts “back in the day”! We finally were able to escape after a lot longer than we wanted to stay. Look closely and you can see the cross on the ground. Daddy Warbucks told us it was from the old church that used to sit where his house is now! 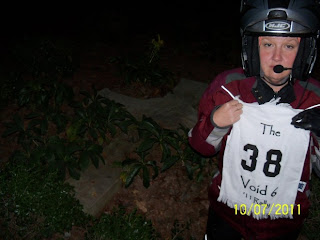 We had originally planned a group bonus worth a bunch of points “Group N” which required a series of bonus locations in a specific order. It was going to be close from the start and here is where our earlier poor judgement ruined that plan.

Somewhere around Gretna, VA enroute to the Avenel House the GPS popped up and the voice in my head said turn right in 1 mile. Thinking we were on the right path, we made the mistake of blindly following “the bitch”. As I made the turn, I noted that the road was called Climax Road. Anti-Climax is more like it. After a couple of miles, it degenerated into a paved goat trail that was not marked or lined, narrow, rough, full of sharp turns and 90 and 180 degree switchbacks, not a single house or light in sight. 14 more miles to the next turn and without a safe place to turn around we went. Slowly, very slowly we went as fog engulfed us! 25 mph was pushing it as we commented about our bleached bones being found years into the future! This mistake cost us more time we didn’t have.

The Avenel House in Bedford, VA was to be the start of our Group N. There was a total mileage cap for the rally of 1421 miles. When we did the math upon arrival, we realized we would be over the mileage cap by too many miles to suffer a 50 point penalty for each mile. We also were too late to start Group N without really being in danger of being declared Did Not Finish (DNF) by missing the 29 hour deadline. So…..the time is now 0058 (12:58 AM), Odometer is at 119139 (848 miles) and we haven’t started our mandatory rest bonus yet. 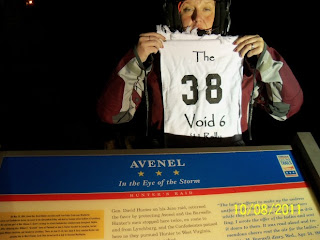 We elected to ride back to Lynchburg to the finish and complete the odometer check which would double bonuses afterwards. With instructions that were sketchy at best, we took off only to hit the fog again. Oh and I should mention my failure to properly prepare since we didn’t have a single flashlight that would work, Barbara is trying to read the instructions on this tiny sheet of paper in the dark and with the fog, you couldn’t see a turn until you were right on it. About halfway through, we just told the GPS to take us back…..which luckily matched the route we were trying to read in the dark. We made it back with the right mileage - sheer luck!

2:28 AM……odometer check is complete. We normally spend our rest bonus in a motel somewhere on the route to get some quality sleep. Like Joseph and Mary trying to find a room at the inn in Bethlehem, the only place available for us was something that closely resembled the manger……one of the conference rooms at the motel. Sleeping bodies littered the floor and filled the chairs in the hall. We managed to find a spot and stretched out thinking we would sleep for our mandatory 3 hour rest break. Those sleeping bodies were all tired rallyist like us and the snoring that some of these folks were emanating had to closely resemble the animals of the stable in Bethlehem! Such a symphony of animalistic sounds….had I the foresight, I would have turned the recorder on the phone on just to prove my point. The most vicious of the snorers was on his stomach and I'm sure when he woke up he had carpet fibers in his mouth.  We slept fitfully as the temperature in the room dropped to meat locker conditions waking each time someone would get up and leave. Thankfully one of the more vicious snoring machines departed fairly early. As we dressed to leave, I noticed a fellow rallyist crawling out from under one of the tables covered completely in a tablecloth…..rather weird sight at 6:00 AM!  He later related it was quite cozy and the only place he could find when it was time to rest.

A quick search of available bonus locations that would keep us within the mileage cap and score some very badly needed points was conducted and we were off Fredricksburg, VA to get our rally book stamped and signed at Morton’s BMW, a big supporter of the long distance riding fraternity. We wish we had the time to look at all the pretty motorcycles, but the clock was running and we were off.

We both badly needed food so a quick stop at a Waffle House filled our empty stomachs. As anyone who is a Waffle House regular knows, there are some pretty interesting folks who not only work there, but frequent them. Our waitress well may have been either an escapee from a local mental institution or rode a short yellow bus when younger, but she was efficient……talkative but efficient. I asked where Milford, VA was and got a funny look and a comment that sounded much like she had never been out of whatever county we were were in. This lady was 50ish I would guess……hard to tell with folks whose elevators fail to reach the top floor.

Milford, VA was the next stop for a picture of the Caroline County Water Tower. Not haunted, just a water tower! 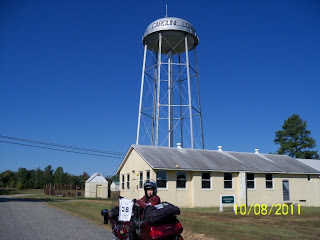 Back to the finish line was now the goal. We had mistakenly bypassed a bonus on the way to Morton’s worth a substantial number of points…..another error in planning and judgement.
On the way back we snagged our last bonus worth a whopping 66 points. The Winton Country Club where people have reported seeing thing and hearing strange noises. Some have reported coming down the steps and seeing a woman’s reflection in the window. We got the required photo and headed on in. 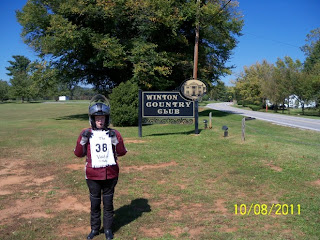 We hit the finish line with around 30 minutes to spare and under the mileage cap!

Scoring was relatively painless as we have finally worked out a good system of recordkeeping on the road and it was just a matter of transferring that information into our rally book. 9,263 points and we had no way of knowing how poorly we had done until the final announcement at the banquet.

We had showers and a badly needed nap before the 7:30 banquet. Food was plentiful and as always everyone was hungry. Results were announced and lo and behold our very poorly executed plan was worth a 5th place finish…..our best yet! Had we followed one of the basic tenents of rallying……plan your ride and ride your plan we would have done much better. Lessons are always learned though and each time we do this we get more efficient at routing and executing.

Rather than just blast home, we took the scenic route to Helen, GA for the night. A very enjoyable ride to Helen with great roads and scenery through the Blue Ridge mountains and especially through the Pisgah National Forest. Add a good German schnitzel dinner with a big ole German Hefe Weissen beer and the day was complete.

Home was a slog through the Atlanta traffic in spitting rain. Safe and sound back in the garage at 1:00 PM with another fun filled weekend in the books. We rode a bit over 2,000 miles Thursday through Monday and enjoyed almost every mile!

Rally season is over until Cape Fear kicks off next April. Stay tuned!
Posted by rick.bailey at 5:30 AM